Spain has been hailed as a success story, because its economy is finally growing - but it still has 22 percent unemployment. And there is an arc of stagnation across the continent's top: Finland is experiencing a depression comparable to that in southern Europe, and Denmark and the Netherlands are also doing very badly.

How did things go so wrong? The answer is that this is what happens when self-indulgent politicians ignore arithmetic and the lessons of history. And no, I'm not talking about leftists in Greece or elsewhere; I'm talking about ultra-respectable men in Berlin, Paris, and Brussels, who have spent a quarter-century trying to run Europe on the basis of fantasy economics.

To someone who didn't know much economics, or chose to ignore awkward questions, establishing a unified European currency sounded like a great idea. It would make doing business across national borders easier, while serving as a powerful symbol of unity. Who could have foreseen the huge problems the euro would eventually cause?

Actually, lots of people. In January 2010 two European economists published an article titled "It Can't Happen, It's a Bad Idea, It Won't Last," mocking American economists who had warned that the euro would cause big problems. As it turned out, the article was an accidental classic: at the very moment it was being written, all those dire warnings were in the process of being vindicated. And the article's intended hall of shame - the long list of economists it cites for wrongheaded pessimism - has instead become a sort of honor roll, a who's who of those who got it more or less right.

The only big mistake of the euroskeptics was underestimating just how much damage the single currency would do.
The point is that it wasn't at all hard to see, right from the beginning, that currency union without political union was a very dubious project. So why did Europe go ahead with it?

Mainly, I'd say, because the idea of the euro sounded so good. That is, it sounded forward-looking, European-minded, exactly the kind of thing that appeals to the kind of people who give speeches at Davos. Such people didn't want nerdy economists telling them that their glamorous vision was a bad idea.

Indeed, within Europe's elite it quickly became very hard to raise objections to the currency project. I remember the atmosphere of the early 1990s very well: anyone who questioned the desirability of the euro was effectively shut out of the discussion. Furthermore, if you were an American expressing doubts you were invariably accused of ulterior motives - of being hostile to Europe, or wanting to preserve the dollar's "exorbitant privilege." And the euro came. For a decade after its introduction a huge financial bubble masked its underlying problems. But now, as I said, all of the skeptics' fears have been vindicated.

Furthermore, the story doesn't end there. When the predicted and predictable strains on the euro began, Europe's policy response was to impose draconian austerity on debtor nations - and to deny the simple logic and historical evidence indicating that such policies would inflict terrible economic damage while failing to achieve the promised debt reduction.

It's astonishing even now how blithely top European officials dismissed warnings that slashing government spending and raising taxes would cause deep recessions, how they insisted that all would be well because fiscal discipline would inspire confidence. (It didn't.) The truth is that trying to deal with large debts through austerity alone - in particular, while simultaneously pursuing a hard-money policy - has never worked. It didn't work for Britain after World War I, despite immense sacrifices; why would anyone expect it to work for Greece?

The fact that Greece no longer has a currency, that it would have to create one from scratch, vastly raises the stakes. My guess is that euro exit will still prove necessary. And in any case it will be essential to write down much of Greece's debt.

But we're not having a clear discussion of these options, because European discourse is still dominated by ideas the continent's elite would like to be true, but aren't. And Europe is paying a terrible price for this monstrous self-indulgence. 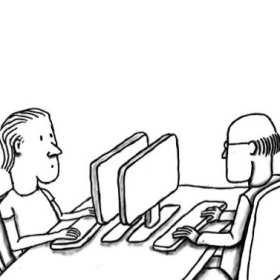