What did the men who would be president talk about during last week's prime-time Republican debate? Well, there were 19 references to God, while the economy rated only 10 mentions. Republicans in Congress have voted dozens of times to repeal all or part of Obamacare, but the candidates only named President Barack Obama's signature policy nine times over the course of two hours. And energy, another erstwhile GOP favorite, came up only four times.

Strange, isn't it? The shared premise of everyone on the Republican side is that the Obama years have been a time of policy disaster on every front. Yet the candidates on that stage had almost nothing to say about any of the supposed disaster areas.

And there was a good reason they seemed so tongue-tied: Out there in the real world, none of the disasters their party predicted have actually come to pass. Obama just keeps failing to fail. And that's a big problem for the GOP - even bigger than Donald Trump.

Start with health reform. Talk to right-wingers, and they will inevitably assert that it has been a disaster. But ask exactly what form this disaster has taken, and at best you get unverified anecdotes about rate hikes and declining quality.

Meanwhile, actual numbers show that the Affordable Care Act has sharply reduced the number of uninsured Americans - especially in blue states that have been willing to expand Medicaid - while costing substantially less than expected. The newly insured are, by and large, pleased with their coverage, and the law has clearly improved access to care.

Needless to say, right-wing think tanks are still cranking out "studies" purporting to show that health reform is a failure. But it's a losing game, and judging from last week's debate, Republican politicians know it.

But what about side effects? Obamacare was supposed to be a job-killer - in fact, when Marco Rubio was asked how he would boost the economy, pretty much all he had to suggest was repealing health and financial reforms. But in the year and a half since Obamacare went fully into effect, the U.S. economy has added an average of 237,000 private-sector jobs per month. That's pretty good. In fact, it's better than anything we've seen since the 1990s.

Which brings us to the economy.

There was remarkably little economic discussion at the debate, although Jeb Bush is still boasting about his record in Florida - that is, his experience in presiding over a gigantic housing bubble and providentially leaving office before the bubble burst. Why didn't the other candidates say more? Probably because at this point the Obama economy doesn't look too bad. Put it this way: If you compare unemployment rates over the course of the Obama administration with unemployment rates under President Ronald Reagan, Obama ends up looking better - unemployment was higher when he took office, and it's now lower than it was at this point under Reagan.

OK, there are many reasons to qualify that assessment, notably the fact that measured unemployment is low in part because of a decline in the percentage of Americans in the labor force. Still, the Obama economy has utterly failed to deliver the disasters - hyperinflation! a plunging dollar! fiscal crisis! - that just about everyone on the right predicted. And this has evidently left the Republican presidential field with nothing much to say.

One last point: Traditionally, Republicans love to talk about how liberals with their environmentalism and war on coal are standing in the way of American's energy future. But there was only a bit of that last week - perhaps because domestic oil production has soared and oil imports have plunged since Obama took office.

What's the common theme linking all the disasters that Republicans predicted but which failed to materialize? If I had to summarize the GOP's attitude on domestic policy, it would be that no good deed goes unpunished. Try to help the unfortunate, support the economy in hard times or limit pollution, and you will face the wrath of the invisible hand. The only way to thrive, the right insists, is to be nice to the rich and cruel to the poor, while letting corporations do as they please.

According to this worldview, a leader like Obama who raises taxes on the 1 percent while subsidizing health care for lower-income families, who provides stimulus in a recession, who regulates banks and expands environmental protection, will surely preside over disaster in every direction.

But he hasn't. I'm not saying that America is in great shape, because it isn't. Economic recovery has come too slowly and is still incomplete; Obamacare isn't the system anyone would have designed from scratch; and we're nowhere close to doing enough on climate change. But we're doing far better than any of those guys in Cleveland will ever admit. 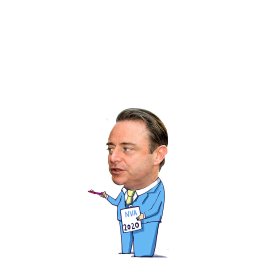