These are our images of creativity: filled with harmony. Innovation, we think, is something magical that happens when people find synchrony together. The melodies of Rodgers blend with the lyrics of Hammerstein. It’s why one of the cardinal rules of brainstorming is “withhold criticism.” You want people to build on one another’s ideas, not shoot them down. But that’s not how creativity really happens.

When the Wright brothers said they thought together, what they really meant is that they argued together. One of their pivotal decisions was the design of a propeller for their plane. They squabbled for weeks, often shouting back and forth for hours. “After long arguments we often found ourselves in the ludicrous position of each having been converted to the other’s side,” Orville reflected, “with no more agreement than when the discussion began.” Only after thoroughly decimating each other’s arguments did it dawn on them that they were both wrong. They needed not one but two propellers, which could be spun in opposite directions to create a kind of rotating wing. “I don’t think they really got mad,” their mechanic marveled, “but they sure got awfully hot.”

The skill to get hot without getting mad — to have a good argument that doesn’t become personal — is critical in life. But it’s one that few parents teach to their children. We want to give kids a stable home, so we stop siblings from quarreling and we have our own arguments behind closed doors. Yet if kids never get exposed to disagreement, we’ll end up limiting their creativity.

We’ve known groupthink is a problem for a long time: We’ve watched ill-fated wars unfold after dissenting voices were silenced. But teaching kids to argue is more important than ever. Now we live in a time when voices that might offend are silenced on college campuses, when politics has become an untouchable topic in many circles, even more fraught than religion or race. We should know better: Our legal system is based on the idea that arguments are necessary for justice. For our society to remain free and open, kids need to learn the value of open disagreement.

It turns out that highly creative adults often grow up in families full of tension. Not fistfights or personal insults, but real disagreements. When adults in their early 30s were asked to write imaginative stories, the most creative ones came from those whose parents had the most conflict a quarter-century earlier. Their parents had clashing views on how to raise children. They had different values and attitudes and interests. And when highly creative architects and scientists were compared with their technically skilled but less original peers, the innovators often had more friction in their families. As the psychologist Robert Albert put it, “the creative person-to-be comes from a family that is anything but harmonious, one with a ‘wobble.'”

Wilber and Orville Wright came from a wobbly family. Their father, a preacher, never met a moral fight he wasn’t willing to pick. They watched him clash with school authorities who weren’t fond of his decision to let his kids miss a half-day of school from time to time to learn on their own. Their father believed so much in embracing arguments that despite being a bishop in the local church, he had multiple books by atheists in his library — and encouraged his children to read them.

If we rarely see a spat, we learn to shy away from the threat of conflict. Witnessing arguments — and participating in them — helps us grow a thicker skin. We develop the will to fight uphill battles and the skill to win those battles, and the resilience to lose a battle today without losing our resolve tomorrow. For the Wright brothers, argument was the family trade and a fierce one was something to be savored. Conflict was something to embrace and resolve. “I like scrapping with Orv,” Wilbur said.

The Wright brothers weren’t alone. The Beatles fought over instruments and lyrics and melodies. Elizabeth Cady Stanton and Susan B. Anthony clashed over the right way to win the right to vote. Steve Jobs and Steve Wozniak argued incessantly while designing the first Apple computer. None of these people succeeded in spite of the drama — they flourished because of it. Brainstorming groups generate 16 percent more ideas when the members are encouraged to criticize one another. The most creative ideas in Chinese technology companies and the best decisions in American hospitals come from teams that have real disagreements early on. Breakthrough labs in microbiology aren’t full of enthusiastic collaborators cheering one another on but of skeptical scientists challenging one another’s interpretations.

If no one ever argues, you’re not likely to give up on old ways of doing things, let alone try new ones. Disagreement is the antidote to groupthink. We’re at our most imaginative when we’re out of sync. There’s no better time than childhood to learn how to dish it out — and to take it.

As Samuel Johnson was growing up, his parents argued constantly. He described a family as “a little kingdom, torn with factions and exposed to revolutions.” He went on to write one of the greatest dictionaries in history, one that had a lasting impact on the English language and wasn’t supplanted until the Oxford English Dictionary appeared more than a century later. Who would be more motivated and qualified to clean up a messy language than someone whose household was filled with it?

Children need to learn the value of thoughtful disagreement. Sadly, many parents teach kids that if they disagree with someone, it’s polite to hold their tongues. Rubbish. What if we taught kids that silence is bad manners. It disrespects the other person’s ability to have a civil argument — and it disrespects the value of your own viewpoint and your own voice. It’s a sign of respect to care enough about someone’s opinion that you’re willing to challenge it.

We can also help by having disagreements openly in front of our kids. Most parents hide their conflicts: They want to present a united front, and they don’t want kids to worry. But when parents disagree with each other, kids learn to think for themselves. They discover that no authority has a monopoly on truth. They become more tolerant of ambiguity. Rather than conforming to others’ opinions, they come to rely on their own independent judgment.

It doesn’t seem to matter how often parents argue; what counts is how they handle arguments when they happen. Creativity tends to flourish, Mr. Albert, the psychologist, found, in families that are “tense but secure.” In a recent study of children ages 5 to 7, the ones whose parents argued constructively felt more emotionally safe. Over the next three years, those kids showed greater empathy and concern for others. They were friendlier and more helpful toward their classmates in school.

Instead of trying to prevent arguments, we should be modeling courteous conflict and teaching kids how to have healthy disagreements. We can start with four rules:

+ Frame it as a debate, rather than a conflict.

+ Make the most respectful interpretation of the other person’s perspective.

+ Acknowledge where you agree with your critics and what you’ve learned from them.

Good arguments are wobbly: a team or family might rock back and forth but it never tips over. If kids don’t learn to wobble, they never learn to walk; they end up standing still. 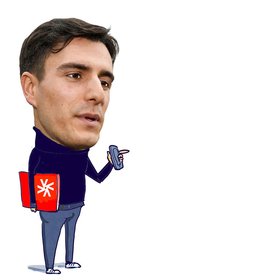