Among the estimated 272,000 people who were exposed was a newborn girl who withered and died from radiation sickness. Taisia A. Fomina, a friend of the family’s, recalled that the girl’s father, ignorant of the danger, welded a bed frame from irradiated metal recycled from the nuclear plant. The child was poisoned as she slept.

Residents learned of the radiation risk only a year after the accident, said Fomina, now 84. “Some rumors went around town that something blew up at the factory, but we didn’t know what,” she added. “Of course, they didn’t tell us.”

Now, another possible accident at Mayak, a plant at the heart of Russia’s nuclear program, and the paucity of information coming out about it, is again raising alarms.

Last month, French and German radiation safety officials identified the southern Ural Mountain region, home of Mayak, as the likely source of a cloud of a radioactive isotope, ruthenium 106, that they detected wafting over Europe. The plant at Mayak reprocesses spent fuel and produces isotopes.

Ruthenium 106, which is obtained from spent fuel, is used mostly in medicine. It is considered not particularly dangerous because of its short half-life, 373 days, and harmless at the low concentrations that have turned up in Europe.

But mystery lingers around the cloud all the same.

The German Federal Office for Radiation Protection reported the radiation cloud and, on Oct. 9, pinpointed its likely origin as the southern Ural Mountains in Russia or Kazakhstan. That is near the closed town called Ozersk but known as Chelyabinsk-40 when Fomina worked there from 1954 to 1960. The agency said the cause of the cloud is still “not clear.”

French authorities mapped wind patterns and reached the same conclusion: The contamination was floating in from somewhere near Mayak, a region of cedar forests, lakes and swamps about 1,000 miles east of Moscow.

The French nuclear safety institute, which tracked the cloud, said that if the accident had occurred in France, measures would have been taken to protect the local population within a few miles, and precautions enacted over longer distances to halt the sale of contaminated crops. But the concentrations in the air over Europe, the institute said in a Nov. 9 report, “are of no consequence for human health and for the environment.”

Puzzlingly, on Oct. 9, regional authorities in the Chelyabinsk region, home of the plant, issued a statement saying that the Russian state nuclear corporation, Rosatom, had regularly tested the air and that “the radiation background in the region is within norms.”

A string of official denials followed. The press offices of several Russian nuclear plants issued statements denying any accidents or leaks and asserting that they had detected no elevated levels of ruthenium 106 in the air. One spokesman, for a plant in Smolensk, told RIA, a state news agency, “this is a rare element and we would have noticed it.”

Rosatom, which runs the Mayak site, announced on Oct. 11 that “the radiation condition around all nuclear objects in the Russian Federation are within norms and correspond to background radiation levels.” The press office of the Ministry of Emergency Situations said on Oct. 13 that “no radiation cloud was found over the territory of the Ural Mountains.”

Then this month, the statements suddenly shifted. The agency responsible for monitoring radiation in Russia, Roshydromet, said it had in fact found in late September and early October what it called “extremely high” levels of ruthenium 106 at two monitoring sites near Mayak.

“The cover-up is more interesting than the accident,” said Frank N. von Hippel, a physicist at Princeton who advised the Clinton White House and who has repeatedly visited Russian nuclear sites.

“I think they’re probably more worried about upsetting the locals than the world,” von Hippel said. “This could be very disruptive politically of the calm that Putin has imposed on the place. The environmentalists are the most likely ignition point for any unrest.”

The Roshydromet statement about the ruthenium 106 levels was undated. Officials at the agency pointed it out on their website Friday to a researcher from Greenpeace, Rashid R. Alimov, in response to a question about the radiation cloud posed by the conservation group last week.

The agency then published a statement saying that “the discovery of even insignificant concentrations of radioactive isotopes on Russian territory speaks to the high effectiveness,” of the Russian monitoring system. Environmental organizations, the statement said, were publicizing the incident to raise money.

“The heightened attention to this monitoring was created by some conservation organizations in the period of their budget formation for next year, with the goal of ‘elevating’ their importance in the eyes of the public,” it said.

Alimov said, “They say we were worsening the situation, driving everybody into a panic.” In fact, he said, Greenpeace has emphasized that the now dissipating cloud over Europe is harmless, although it may have posed dangers near the source.

What is worrisome, Alimov said, is the Russian government’s apparent reluctance to publicize information about a radiation leak and a potential health hazard.

Officials at Mayak denied in interviews with the newspaper Kommersant that the plant was the source of the leak. Rosatom, the nuclear company, did not return calls to the press office.

Stepan Kalmykov, a chemistry professor at Moscow State University, told N+1, an online news portal, that while posing no health hazard, the leak clearly raised other worries in Russia and beyond.

“Somewhere, apparently, the process broke down,” he said, “and nobody can guarantee that at the same place a more serious and more dangerous accident will not happen.”

The ruthenium cloud is not an indication of a reactor meltdown, which would spew a bouquet of many different isotopes, not just the one, said Vitaly G. Fedchenko, senior researcher at the Stockholm International Peace Research Institute.

“The release would have to come from a container or a place where already separated ruthenium isotope is stored,” he said.

Scientists say the ruthenium 106 release appears to be over. While European authorities have traced the cloud back to a region around the Mayak plant, the precise source has not been determined. It might have spilled in a transportation accident.

“The problem is, we don’t know,” Fedchenko said.

After the collapse of the Soviet Union, coming on the heels of the Chernobyl meltdown in 1986, the framers of Russia’s new constitution prohibited the classification of information about the environment, although that provision has been flouted before. The Mayak spill in 1957 is often compared in its severity with the two worst power plant meltdowns, at Chernobyl and at Fukushima, Japan.

In Chelyabinsk-40, residents were left largely in the dark, and the scope of the disaster was suppressed for decades. The source of the radiation that killed the daughter of Fomina’s friend — the radioactive bed — was discovered only after a teenage girl living in an apartment one floor lower also died. Three years later, the infant’s mother also died. 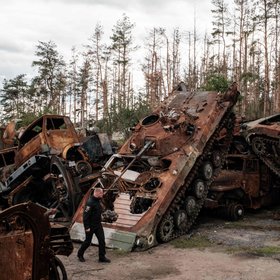