In Fox News' election coverage Tuesday night, there was little pretense of fairness or balance. What there was, from the start, was a glum tone that turned downright funereal by the time Mitt Romney finally conceded, near 1 a.m. To watch the network's anchors and guests work through the dawning realization that their candidate was doomed was to witness a textbook case of Elisabeth Kubler-Ross' five stages of grief.

Denial: With the early returns breaking badly for Romney, Karl Rove points to an exit poll suggesting that Democratic turnout was low in Ohio's Cuyahoga County. Everyone basks in the critical importance of Ohio's Cuyahoga County. Anchor Megyn Kelly asks, "Is this just math you do as a Republican to make yourself feel better?" Rove assures her it's real.

Mike Huckabee, meanwhile, is counting on rural voters to turn things around: "I still think Mitt Romney wins when it is all over."

Anger: Shortly before the race is called, Sarah Palin says an Obama victory would be a "catastrophic setback to our economy" and lashes out at the public: "I just cannot believe, though, that the majority of Americans would believe that incurring more debt is good for our economy ... I cannot believe the majority of Americans would believe it's OK not to follow the Constitution and not have a budget."

Bargaining: With all of the networks calling the race for Obama, including Fox News, Karl Rove pleads for his fellow hosts to un-call Ohio, promising that forthcoming returns in the state will be favorable to Romney.

Megyn Kelly, followed by the cameras, heads back through the bowels of the building to grill Fox News' decision desk and see if the network's analysts will change their minds. They won't.

Depression: Ed Henry, reporting stone-faced from Obama headquarters as it erupts in jubiliation: "The crowd is near pandemonium now, despite the fact that employment is hovering near 8 percent."

Charles Krauthammer: "As a psychiatrist, I will offer to write prescriptions for anyone who needs them right now."

Acceptance: Still waiting on this one. 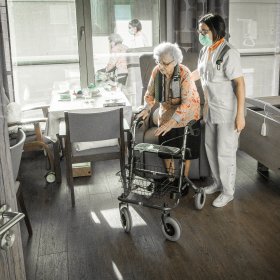