A nearly bankrupt Greece is taking desperate measures to preserve cash. Absent a last-minute deal with its creditors, the nation will run out of money early next month.

Two weeks ago, Greece nearly defaulted on a debt payment of 750 million euros ($825 million) to the International Monetary Fund.

For the rest of this month, Greece should be able to cover daily cash deficits of around 100 million euros, government ministers say. Starting June 5, however, these shortfalls will rise sharply, to around 400 million euros, as another IMF obligation comes due. They will then double in size on June 8 and 9.

"At that point it is all over," said a senior Greek finance official who spoke on the condition of anonymity.

On Sunday, Interior Minister Nikos Voutsis said there would not be enough money to pay the IMF if there was no deal by June 5.

In a society that has lived off the generosity of the government for decades, the cash crisis has already had a shattering impact. Universities, hospitals and municipalities are struggling to provide basic services, and the country's underfunded security apparatus is losing its battle against an influx of illegal immigrants.

In effect, analysts say, Greece is operating as a bankrupt state.
The government's call to conserve funds has been far-reaching.

All embassies and consulates - as well as municipalities throughout the country - have been told to forward surplus funds to Athens. Hospitals and schools face strict orders not to hire doctors and teachers. And national security officials complain they are under intense pressure to keep military air and sea missions to a minimum, at a time when migrants from Africa and the Middle East are rushing to Greece's shores.

Even the swelling ranks of investment bankers, lawyers and consultants advising the Finance Ministry have been told that, for now at least, their work is to be considered pro bono.

Since its first bailout in 2010, Greece has been forced by its creditors to cut spending by 28 billion euros - quite a sum in a 179 billion euro economy. A proportional dose of austerity applied to the United States, for example, would come to $2.6 trillion.

During the past six months, a period during which Greece has had its credit line revoked over disagreements with Europe regarding economic overhauls, the state has been forced to wield an even sharper knife.

For a generation of Greek politicians who saw government spending (and borrowing) as a national birthright, the idea of deploying only the money at hand has been jarring.

But for other Greeks who are eager to break from the country's tradition of dispensing political favors to the well-connected, these years of imposed restraint have also provided a valuable lesson.

"There are no free rides in this country anymore," said Kostas Bakoyannis, 37, governor of the Central Greece administrative region. "The old parties - they never spoke truth to the people. Now we have to live on what we can make and produce."

Bakoyannis was in the middle of a weeklong tour of the 25 municipalities he oversees. He delivered this very message to the city elders of Thebes, a town of about 36,000 people, roughly 75 miles northwest of Athens.

For about a year, Thebes has been trying to complete a modest 2 million euro project to refurbish the town's main street. But because the construction company has not been paid in more than a month, work has ground to a halt.

An abandoned bulldozer gathering dust in the rubble of the road suggests that the project will not be completed anytime soon.

What makes this work stoppage especially worrisome to Bakoyannis is that it is one of the many infrastructure projects in Greece that is backed by the European Union.

About 89 percent of Greece's 6.5 billion euro investment budget is majority financed by Europe, meaning the government is paid back shortly after each outlay.

Through the worst days of austerity, Bakoyannis explains, these investments - highways, bridges and ports, for example - had continued, as the government always knew it would be paid back in weeks.

Since April 30, he says, the liquidity crisis in Athens has forced the government to stop payment on these initiatives as well, the first time in his memory that has happened.

"These projects are our lifeline," said Bakoyannis, who has seen his infrastructure budget cut to 12 million euros from 65 million euros in the past four years. "It's not about Keynesian politics anymore - it's about finding enough money to repair a simple road."

"It's an increasing trend," said Ioannis Michaletos, an analyst with the Institute for Security and Defense Analysis, a nonprofit group in Athens. "There is less money and a lot more work for the police to do."

Perhaps no other areas in Greece have felt the full force of the country's cash drain than its state-funded universities and hospitals.

At the University of Athens, the country's largest educational institution and home to about 125,000 students, the annual operating budget has fallen to 10 million euros from about 40 million euros before the crisis.

As for the hospitals, even though they are taking in twice as many patients now, their budgets have been cut to the bone. In the first four months of this year, health officials say that the 140 or so public hospitals in Greece received just 43 million euros from the state - down from 650 million euros during the same period last year.

Sitting at his desk at the start of yet another 20-hour-plus workday, Theodoros Giannaros, the head of Elpis Hospital in Athens, chain-smoked cigarettes and signed off on a pile of spending requests he said he knew would not be fulfilled.

Since he started work at the hospital in 2010, Giannaros has seen his salary shrink to 1,200 euros a month, from 7,400 euros. His annual budget, once 20 million euros, is now 6 million euros, and the number of practicing doctors has been reduced to 200 from 250.

Like almost everyone in Greece, he is making do with less. The hospital recycles instruments; buys the cheapest surgical gloves on the market (they occasionally rip in the middle of operations, Giannaros says); and uses primarily generic drugs.

"We have learned that we can live with a lot of money and survive with nothing," he said. "Maybe the crisis makes us better people - but these better people will die if the crisis continues."

Giannaros, 58, says he recently suffered a heart attack from the constant stress. But he says it is his surgeons he worries about most.

In aging, depression-ridden Greece, treating the 150 or so patients that come to his hospital each day has put an extraordinary strain on his shrinking corps of doctors.

The fact that many have begun to strike because they are not getting paid for overtime makes matters worse.

Striding across the hospital grounds, Giannaros waved over his star surgeon, Dimitris Tsantzalos.

How many operations did you do last year, he asked.

"About 1,500," said Tsantzalos, who, with his strapping build, seems younger than his 63 years.

Recently he says he put in a month of consecutive 20-hour days and, not surprisingly, confesses to exhaustion.

"I am burnt out," he said. "It's very dangerous for the patients."

A week later, a tragedy struck Giannaros: His 26-year-old son, Patrick, committed suicide by jumping in front of an Athens subway train.

"There was just an emptiness in front of him," Giannaros said between wrenching sobs in a brief telephone conversation. "The emptiness of the future they have taken away from us."

His son had finished his university studies and, unable to find work in a country where more than half the young are jobless, was helping his father at the hospital.

"He saw no future, no way to help his family," Giannaros said. "Now God has found him a job - as an angel."

While Giannaros said he understood the importance of staying current with important creditors like the IMF, he said enough was enough.

"They can take their money," he said, using an expletive. "I feel ashamed to be a European." 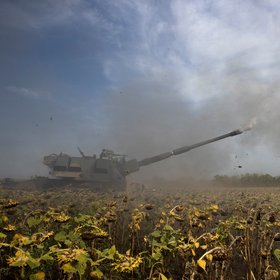