American Megazine is 5 feet tall and more than 3 feet wide. Open it up, and it grows bigger than all but the biggest flat screens. It does what newspapers and evening news broadcasts routinely did when the mass media were still massive: It demands that you pay attention.

American Megazine is published by Lisa Anne Auerbach, a 47-year-old artist from Los Angeles. The first two issues are currently on display in Japan as part of "Parasophia: Kyoto International Festival of Contemporary Culture," an exhibition running through May 10 at the Kyoto Municipal Museum of Art.

Auerbach is known primarily for her knit work: sweaters, scarves and banners that subvert the cozy orderliness of traditional Fair Isle patterns with roughly rendered graphic elements, loose strands of yarn and, most of all, seemingly hand-scrawled political slogans, jokes and other bits of language. Imagine your Aunt Martha's Christmas gift from 1987, defaced by a progressive activist raised on punk.

The sweaters grew out of Auerbach's status as a bicycle commuter in Los Angeles. In traffic, she was surrounded by cars with bumper stickers but unable to participate in that discourse. So she started knitting sweaters with messages on them. "The sweaters were a way to circulate ideas in public in a different way," she said.

With American Megazine, she took up a more traditional format, albeit on an unusually large scale.

In addition to her knit work, Auerbach is also a photographer with a longtime interest in portraits of tiny free-standing businesses. "Small businesses are a really important part of American consciousness," she said. "They're about capitalism and being an individual, pulling yourself up by your bootstraps and putting your best foot forward."

Auerbach noticed that in political discourse, small businesses were often paired with another American phenomenon, megachurches. In 2013 she received a grant to produce a series of photographs of megachurches and ended up documenting institutions in five states.

"These are machines that are transforming thought in this really intense way," she said. Yet they often blend into the landscape and could be mistaken for a mall, a corporate headquarters or a casino. "I wanted to say, 'Here's this thing that's really influential, and here's what it looks like.'"

But when it came time to stage an exhibition, Auerbach balked at filling a gallery with large portraits of megachurches. "It would be almost suffocating to be in a room filled with images of these buildings, or at least that was my fear," she said.

And that's when an idea hit her. She could publish the images in magazine format. And given the capabilities of her Epson 11880 64-inch inkjet printer, she could do so without diminishing the size or quality of her photos.

Making a magazine that could double as an area rug is no trivial undertaking. The two-sided photographic paper that Auerbach uses is 5 feet wide and comes in 50-foot rolls that each cost around $500.

"The first side of a page is really easy because it comes off the roll of paper," she said. Then the printer automatically cuts the page.

That's when things get tricky. "The major challenge of this whole project is printing Side 2," she said. "Because then you're wrestling with this giant 60-by-78-inch piece of paper, trying to get it back into the printer so it will print the other side. And not be crooked." (Six giant pieces of paper, when folded, yield 24 pages of the magazine.)

Auerbach's early efforts left her with a pile of very expensive scratch paper. Eventually, she figured out how to print the other sides and moved on to binding. For that she drills holes into the center of the paper, then sews in a binding. For further reinforcement she employs oversize staples that a metal fabricator has made for her.

"I shove them through the holes from the underside, then hammer them closed," she said.

The second issue of American Megazine is devoted to the storefronts of psychics: small businesses that, like megachurches, weave spirituality into the retail infrastructure of America. Each issue has a maximum circulation of five and can be purchased through the Gavlak Gallery in Los Angeles. To date, only one copy of each has sold - but with prices starting at $12,000 per issue, the megazines are hardly designed for impulse buys.

Still, they are reaching a global audience through museum and gallery appearances. Last year the second issue appeared at the Whitney Biennial in New York. Now, both issues are at the Parasophia exhibition in Japan.

When American Megazine appears in public, two human page turners wearing T-shirts that read "Bigger" and "Better" accompany it. While they're there to perform a real function, their presence also serves as a wry take on the state of print media: Like all paper-based publications these days, American Megazine might be viewed as cumbersome and retrograde, requiring an absurd amount of labor to reach readers.

Yet its power is undeniable. In tone, it's a little magazine: informally written and designed, the quirky record of one person's obsessions. In form, it's literally Big Media, more physically impressive than anything the world's largest newspaper and magazine empires would dream of producing at this moment. 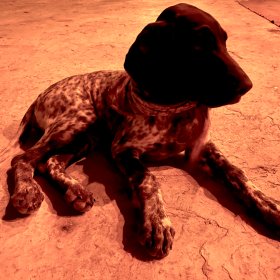